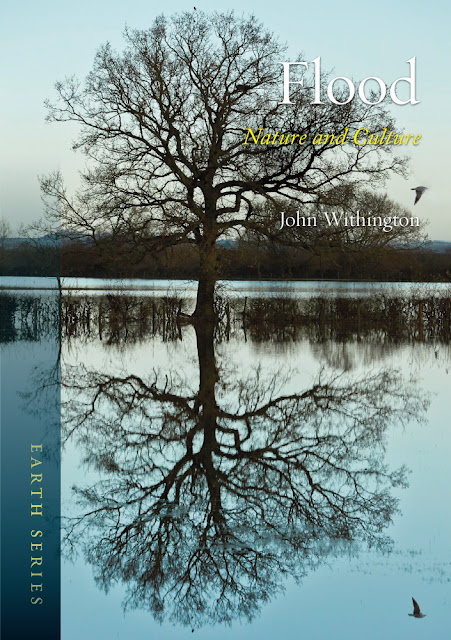 From the ancient story of Noah’s deluge to the China floods of 1931 that killed more than 3 million people, from the broken levees in New Orleans to submerged streets and homes all over Britain, floods have many causes: rain, melting ice, storms, tsunamis and the failures of dams and dikes. They have been used as deliberate acts of war causing thousands of casualties and have often been seen as punishments visited by vengeful gods. Flooding kills more people than any other type of natural disaster. This cultural and natural history of floods tells of the deadliest floods the world has seen while also exploring the role of the deluge in religion, mythology, literature and art.

Flood describes how aspects of floods – the power of nature, human drama, altered landscapes – have fascinated artists, novelists and film-makers. It examines the ancient, catastrophic deluge that appears in many religions and cultures, and considers how the flood has become a key icon in world literatures and a favourite component of disaster movies. John Withington also relates how some of the most ambitious structures ever built by humans have been designed to protect us against these merciless encroaching waters, and discusses the increasing danger floods pose in a future beset by the effects of climate change. Filled with illustrations, Flood offers a fascinating overview of our relationship with one of humanity’s oldest and deadliest foes.

John Withington is an award-winning television, radio and newspaper journalist based in London. He is one of Britain’s leading disaster historians and the author of books such as A Disastrous History of the World (2008), London’s Disasters (2010) and Britain’s 20 Worst Military Disasters (2011).
Posted by Dr Daniel Allen. www.drdanielallen.co.uk at 17:30 1 comment: 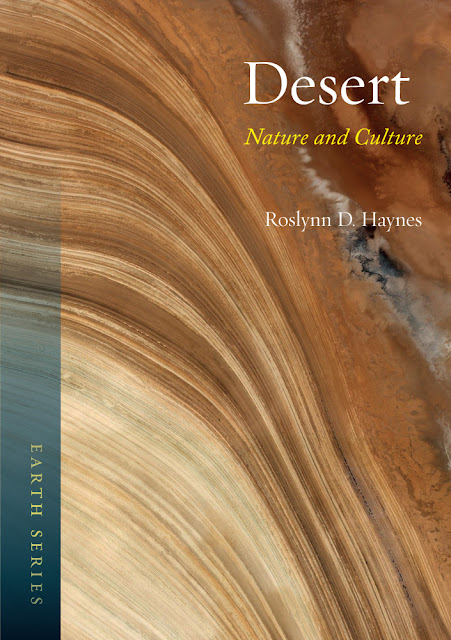 Desert takes a fresh look at one of the most significant natural aspects of our planet as both a geographical feature and a cultural entity. It examines and often overturns our common notions about deserts, from the fear of desolation and death of thirst on the one hand, to the attraction of the exotic, adventure and freedom on the other.

There is an immense geographical diversity of deserts from the Sahara to Antarctica, and plants and animals have adapted to these hostile environments in  intriguing and often bizarre ways. Diverse races have also inhabited deserts and evolved unique lifestyles and cultures in response to their environments. The book also asks why all three of the world’s great monotheistic  religions, Judaism, Christianity and Islam, originated in the deserts of the Middle East, and traces the continuing connections between the minimal materialism of desert existence and the pursuit of a spiritual dimension.

Deserts have also long exerted an allure on the West, leading to the impetus for exploration, the fascination with travellers’ tales and the fashion for Orientalism in art, architecture and dress. Desert also reviews the significance of desolate landscapes in literature and film and looks at artists’ responses to the desert, from seeing it as empty space, devoid of interest or perspective, to devising new visual techniques through which to ‘see’ it. 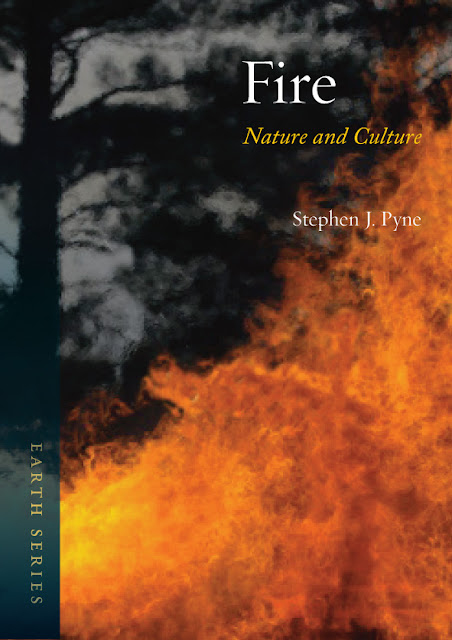 Fire has been an integral feature of our planet for over 400 million years. It has defined human culture from the beginning; it is something without which we cannot survive. While among the most destructive forces on Earth, fire displays equally tremendous powers of cleansing and renewal.

Whether hunting, foraging, farming, herding, building towns or managing nature reserves, fire has been at the core of most human endeavours. With the means to make fire, as origin myths attest, humanity diverged from the rest of creation, and began reshaping the world for its own benefit. Aboriginal societies relied on the control of ignition alone; agricultural societies added control over fuel. Over the past 200 years, however, humanity has found a massive new world of combustibles in the form of fossil biomass and with new combustion practices has radically changed the world’s ecological balance. Throughout history, we have mastered the science and art of fire, but there have been many culturally defining fire disasters going back to antiquity.

In Fire Stephen J. Pyne offers a succinct survey of fire’s long coevolution with humanity. It examines fire’s influence on landscapes, art, science and, in recent times, climate. Fire is lavishly illustrated with images rarely reproduced or unseen in the context of fire. It will appeal to general readers curious to understand fire beyond what is seen in the media, and to fire specialists looking for a broadly cultural explanation behind their discipline.

Stephen J. Pyne is a Regent’s Professor of Environmental History in the School of Life Sciences, Arizona State University. He is the world’s leading fire historian and author of many books on the subject of fire, including Fire: A Brief History and Vestal Fire: a Fire History of Europe.
Posted by Dr Daniel Allen. www.drdanielallen.co.uk at 02:04 No comments: 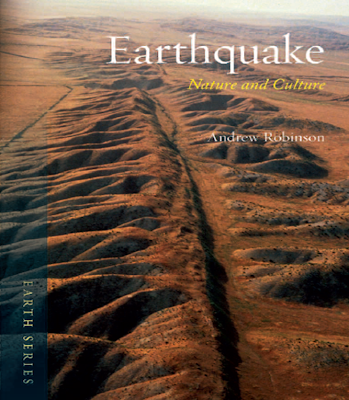 Los Angeles and Tokyo, Istanbul and Beijing, Lima and Cairo are among the more than 60 large cities at definite risk from an earthquake. Although European cities seem less vulnerable, devastating earthquakes have hit Athens, Bucharest, Lisbon, Madrid, Rome and Naples, among others, over the past three centuries. Even London experienced a shock in 1884 that stopped MPs in the Houses of Parliament in their tracks.

This book describes two millennia of major earthquakes and their effects on societies around the world; the ways in which cultures have mythologized earthquakes through religion, the arts and popular culture; and the science of measuring, understanding and trying to predict earthquakes. According to Charles Darwin, a great earthquake in Chile in 1835 was the single most interesting event of his entire five-year journey around the globe on HMS Beagle.

Despite advances in both science and engineering, and improved disaster preparedness, earthquakes continue to cause immense loss of life and damage. The Haiti earthquake of 2010 took some quarter of a million lives. No one will ever forget the catastrophic tsunami unleashed in 2011 by a magnitude-9 earthquake off the east coast of Japan – a crisis described by Japan’s prime minister as the most disastrous national event since the atomic bomb strikes of 1945. Tokyo was largely unaffected in 2011, unlike in 1703, 1855 and 1923, when earthquakes ravaged the capital. How long will it be before the next big Tokyo earthquake?

Written by a highly experienced science writer, journalist and scholar, Earthquake will appeal as much to general readers of popular science as it will to experts in many fields.

'Studying earthquakes is somewhat like the apocryphal medical school dean who tells students: "Half of what we will teach you in the next four years is wrong. The problem is that we don't know which half." Robinson conveys this spirit in a lively and well-written introduction to earthquakes and how people discovered, struggle to understand, and try to figure out how to deal with this dramatic, destructive, and still poorly understood phenomenon.'
– Seth Stein, seismologist and author of Disaster Deferred: How New Science Is Changing Our View of Earthquake Hazards in the Midwe

Andrew Robinson is the author of 25 books on the arts and sciences, including the prize-winning Earthshock: Hurricanes, Volcanoes, Earthquakes, Tornadoes and Other Forces of Nature, The Story of Measurement and The Scientists: An Epic of Discovery (as editor). He also writes for the science journals, The Lancet, Nature and New Scientist. He has been a Visiting Fellow at the University of Cambridge and is a Fellow of the Royal Asiatic Society.
Posted by Dr Daniel Allen. www.drdanielallen.co.uk at 01:44 1 comment: 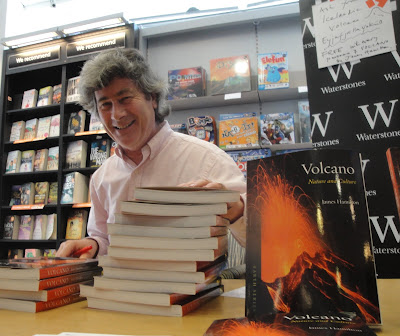 The Earth series officially launched at Waterstones Oxford on Saturday 26 May 2012, with author James Hamilton signing his fascinating book, Volcano.

Volcanoes have caught mankind's imagination for thousands of years. Local Author James Hamilton will be in store to launch the brilliant new Earth Series of books.

Posted by Dr Daniel Allen. www.drdanielallen.co.uk at 22:42 No comments:

'What a fantastic idea, science and culture brought down to earth. I can't wait to read the next book in the series.' – David Bellamy

'At last, a series of books on the earth for lay people that combine authoritative, succinct, and entertaining narrative with magnificent illustrations. The Earth series will make us marvel anew at the diversity and astounding beauty of the world around us. Each book will take popular understanding of the earth to a new level. No one seriously interested in the future of our planet should be without them.'
– Brian M. Fagan, author of The Great Warming: Climate Change and the Rise and Fall of Civilizations and Elixir: A Human History of Water

'The books in the Earth series are magnificent. We may think we know about waterfalls, or volcanoes – after all, we learned about them at school, right? But you will know a lot more from these superbly crafted books. Full of information and explanation, and beautifully illustrated, these books have a strong narrative. They keep our attention. They are great geography. These books will get us reading geography for pleasure.'
– Professor David Lambert, Chief Executive of the Geographical Association and Professor of Geography Education, Institute of

EARTH is the fascinating new series from Reaktion Books.

Written by experts who are passionate about their subject, it is the first of its kind to trace the historical significance of natural phenomena and cultural history of natural resources.

By bringing together representations from mythology, religion, art, literature, science, popular culture, cinema and television, the world around us is explored and explained in an exciting new way.

Each highly accessible book is approximately 35-40,000 words in length and beautifully illustrated throughout, with c. 100 colour and black-and-white images.